From many Vietnam Popular Destinations, today I will introduce Phan Thiet City (Thành Phố Phan Thiết) for you guys. It is the capital of Binh Thuan Province. It is one of the attractive tourism cities in Vietnam. Situated in the South-Central coastal, Phan Thiet is an important junction of national highway No.1A connecting Ho Chi Minh City, national highway No. 55 to Vung Tau, and national highway No. 28 to the Central Highland (Tay Nguyen). Thong Nhat express train and waterways also cross the city. 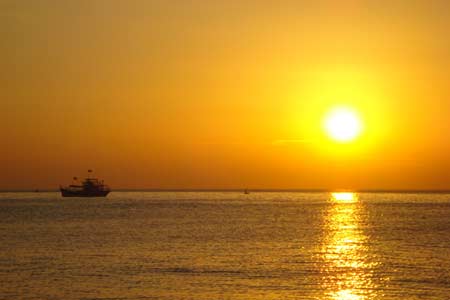 Phan Thiet City’s terrain includes low mountains, rivers, sand dunes and sea with 57.4km of coastal. Ca Ty River divides the city into two parts: the south is trade area, and the north is an administrative one.

The city is situated in a tropical zone with perfect weather for sea tourism, lots of wind and sunlight year-round, rare of the storm, without hoarfrost, annual temperature from 25°C to 27°C. The rainy season lasts from May to October and the dry season is from November to April. Average yearly rainfall is 1,328mm. The relative humidity is 80%. Total hours of sunlight per year are 2,784 hours.

– Mui Ne white sand dunes where you can kiteboarding and windsurfing

To sum up, Phan Thiet City has been one of the most Vietnam Popular Destinations for a long time. One of big contribution is food. Food is diversity there like sizzling cake, fish mix, steamed sponge cake and etc.