From many Vietnam Popular Destinations, today I will introduce about place place which iis called an atmosphere full of the Asian spirit. “August is the death anniversary of Father, March is that of Mother”. The expression lingered in the mind of the Viet people like a reminder of finding way back to the root as August and March came to join vivid festivals in memory of Father and Holy Mother, who founded and protected the supernatural land. One of such traditional major festivals, serving as a pride of indigenous inhabitants as thinking about the kingly race of the Viet’s nation: Trần Temple Festival (Lễ Hội Đền Trần).

The cluster monuments of Tran Temple are located in the suburb of Nam Dinh Province with many communal houses, pagodas, temples, tombs, stone shrines. Temples of Thien Truong, Co Trach and Pho Minh Pagoda – the famous cultural historical relics dedicated to Tran reign, founded on the land where the regime of Tran was generated.

Tran Temple Festival annually lasts from the 15th-20th of lunar August. In the odd years, the festival is launched more magnificently than in even years. Nevertheless, visitors all over the country do not wait for the very happening of the festival to join but eagerly go on pilgrimage far prior to the day.

On their arrival, every people do expect the good and happy things. The large flag flutters in front of the temple – the traditional flag with striking colors standing for five basic elements, its square shape stands for earth (negative), the sickle-shaped tassels for heaven (positive). The word “Tran” is embroidered amidst the flag in Chinese characters by two combined words “Dong” and “A”. It is one of main reason making this place becomes one of Vietnam Popular Destinations.

Tran Temple Festival happens formally, consisting processions from neighboring villages to Thuong Temple. The incense-offering rite involves in 14 virgins carrying 14 trays of flowers into the temple and placing them on thrones in the musical vibration. This act is the image of the former feudal courts.

The Great tutor Tran Quang Khai composed the dance for the victory namely “bai bong” and taught the imperial singers to perform. The dancers were pretty ladies dressed in the ethnic clothes, putting on their shoulders a short pole hanging with flower baskets or paper-made lanterns at the two ends. The dancers also held on to a fan to enrich their performance. “Bai bong” dance contained acts of “bat dat”, “lucdat” and “tudat”.

Nevertheless, it was neatly adjusted under the Nguyen Dynasty. Currently, there is still a team of skilled dancers of the kind in Phuong Bong ward on the outskirts of Nam Dinh. It is said that Hat Van is derived from Hat Chau composed under the Tran Dynasty, popularized and trimmed under the Le Mat time. What do you think about this place, it is interesting and it should considered one of Vietnam Popular Destinations?

To sum up, over the last years, branches and departments, especially the culture-information sector in Nam Dinh, have paid attention to preserving and enhancing such cultural identities. Nam Dinh Province takes pride in its reference of “national root”, giving birth and nursing hearts and souls of “Mother” and “Father” of the people. On the occasion of the festival, people across the country are warmly welcome to the place by the local friendly and simple residents. The unique cultural activities, especially the splendid and radiant atmosphere of “Dong A”, make Tran Temple becoming one of Vietnam Popular Destinations. Hope you guys have a happy trip in my country. 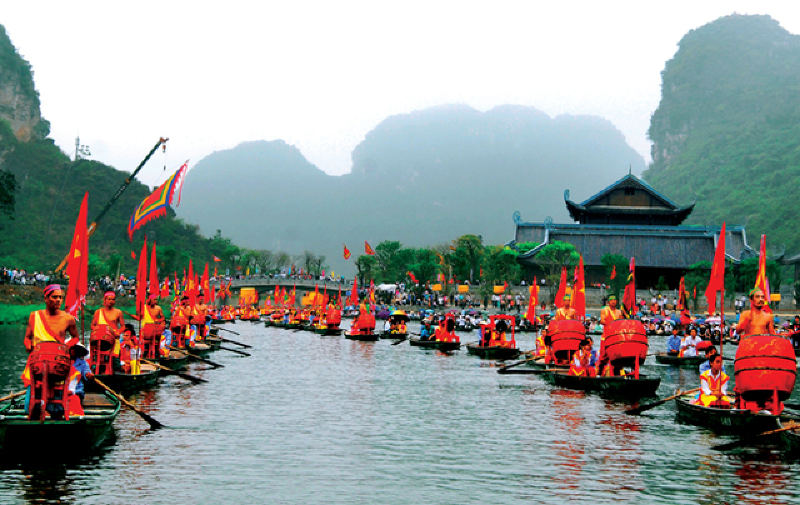